The importance of innovation is well established and accepted in our society. The term innovation is employed so often it is almost overused. Now more than ever it is important to apply the best practices in innovation, which can enable its full potential to be exploited.

The low level of Canadian investment in startup technology companies stems from a long-standing unease with risk. This aversion to risk was passed from distant colonial times and the predominance of natural resources in our economy, placing us higher in the value chain and far from the market king, the customer.

Investment funds such as those of Sherbrooke Innopole and ACET Capital, which invest in innovation and technology companies in the pre-marketing phase, aim to support the first steps in their international expansion. Given the investors’ hesitation to take risk, it is important to try to maximize the return on investment of the limited funds devoted to marketing – for every dollar invested by a Canadian technology company, its American counterpart is spending over six! On top of this, Canadian technology companies take ten years to reach the same commercial results that their American rivals would achieve in four years.

How can this growth be established? Firstly, by increasing the skills of our companies in this field. We discussed this in our October 10 column, announcing the hosting of a virtual summit on marketing innovation in early November. Subsequently, by capitalizing on Canada’s strategic positioning between Europe and the United States, and the free-trade agreements with both.

Unlike Britain, European countries are not as willing to directly enter the American market. Many of them opt to first enter Canada with a large majority more at ease with the Latin culture of Quebec, which shares close similarities with the European landscape. Sherbrooke Innopole has thus built a synergy over the last three years with the region of Rennes in Brittany.

In the same vein, a beautiful collaboration is emerging with Arizona, neighbouring California, for which Canada is the leading business partner and which is creating great opportunities for growth. We are working closely with the University of Arizona and its “Tech Park” located in Tucson, as well as the city of Surprise in northwest Phoenix.

These collaborations and this vision have given birth to an initiative, the Sherbrooke – Rennes – Arizona Entrepreneurial Triangle, which aims to facilitate the networking of technology companies using two foreign ecosystems. If we think about it, international expansion for some is linked to the “soft landing” activities of others. International networking is undoubtedly a high added-value venture for those seeking to translate innovation into opportunity.

Let’s not forget that business is built on trust and that management commitment and quality personal relationships are paramount. Together this illustrates a unified vision of this partnership of more enriched and global communities, which allows us to co-develop the foundations for the next phase of expansion.

We are therefore inviting you to take part in the major event launching this international collaboration under the theme Disruptive Technologies Commercialization: https://sherbrooke-innopole.com/en/triangle-2020. 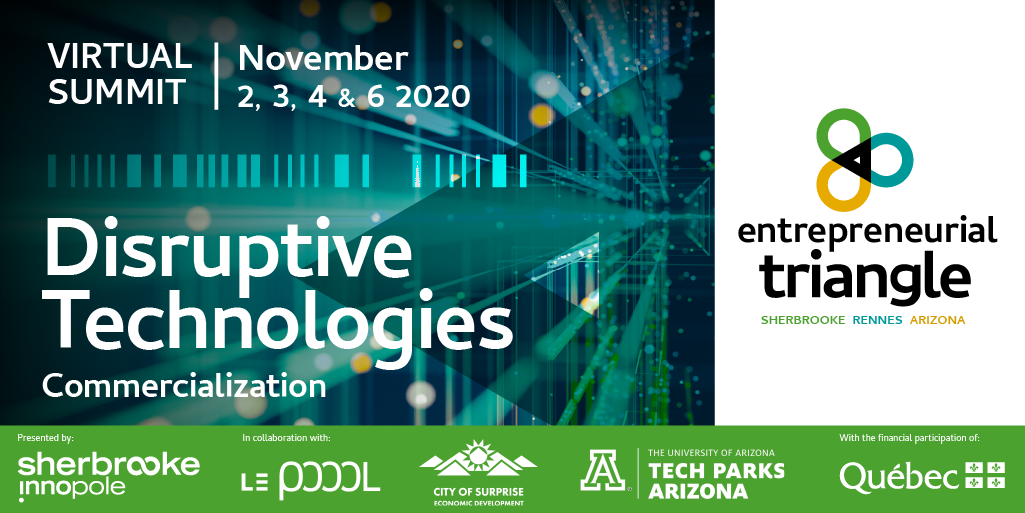 Back to the blog
Read also

Aim For B Corp Certification… as a team!

Josée Larochelle appointed at the Board of Sherbrooke Innopole

Reach your full entrepreneurship potential, with a mentor