Étienne Villeneuve named to Sherbrooke Innopole’s board of directors

Sherbrooke Innopole is proud to announce the nomination of Mr. Étienne Villeneuve, an engineer who is chief of technical services and operations at Neptune Wellness Solutions, as an administrator on our board of directors.

Mr. Villeneuve has a bachelor’s degree in mechanical engineering from the Université de Sherbrooke and has more than 15 years of operational experience in the pharmaceutical, cosmetics, agri-food and natural health products sectors.

Étienne Villeneuve joined Neptune in 2016, with the mandate to manage the Sherbrooke site in terms of production, quality, environmental health and safety, engineering and maintenance.

On a personal level, he has been actively involved in health-related fundraising campaigns, notably research into cancer, multiple sclerosis and early childhood diseases. Moreover, he participated six times in the 1000 km cycling marathon known as the Grand défi Pierre Lavoie.

During Sherbrooke Innopole’s annual general assembly held on April 23, 2019, Mr. Villeneuve was named as the replacement for Pierre Tremblay, who completed the maximum allowed term on the BOD.

During the cocktail hour that followed the AGA, Sherbrooke Innopole honoured Mr. Tremblay for his volunteer involvement as he was stepping down from his positions as administrator and vice-president.

Mr. Tremblay sat on the board of directors from 2011 to 2019 and was a member of several committees, including the Fonds local d’investissement committee, the audit committee, as well as the human resources, nomination and governance committee.

His three years as vice-president were notably marked by the launch of the venture capital investment fund, the inauguration of the multitenant scientific building Espace LABz, and the introduction of Sherbrooke Innopole’s strategic plan for 2018-2020. 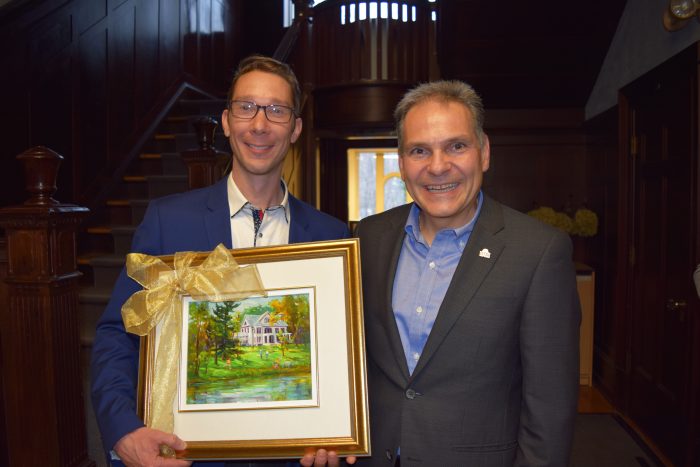 The president of the Sherbrooke Innopole’s BOD, Alexandre Nault, with Pierre Tremblay

A painting of Domaine Howard – where the economic development organization has its offices – was presented to Mr. Tremblay to thank him for his service.

All the members of the team at Sherbrooke Innopole wish to thank you for your commitment!

Back to the blog
Read also

Aim For B Corp Certification… as a team!

Josée Larochelle appointed at the Board of Sherbrooke Innopole

Reach your full entrepreneurship potential, with a mentor