PRESS RELEASE – Sherbrooke Innopole released its 2015 annual activity report today, after a highly eventful year during which major projects were undertaken to support already established industrial businesses and startups, with a high level of investment in the key sectors.

The year 2015 was characterized by extensive changes in regional development structures and substantial budget cuts in public agencies and higher education institutions. On the other hand, Sherbrooke has had a buoyant year in terms of entrepreneurship, and on a global level, the economic upswing in the United States has revived the export side of business in Sherbrooke.

The President of Sherbrooke Innopole’s Board of Directors, Pierre Tremblay, commended Sherbrooke’s entrepreneurs for their resilience. “Although not spectacular, economic performance in 2015 was more than decent. Despite the turmoil, we have collectively stayed the course, and the vitality of our businesses has not only enabled Sherbrooke to end the year with an increase in jobs related to the key sectors, but more importantly, led to investments in the industrial sector of more than $187 million.”

» View the 2015 activity report of Sherbrooke Innopole (in French) 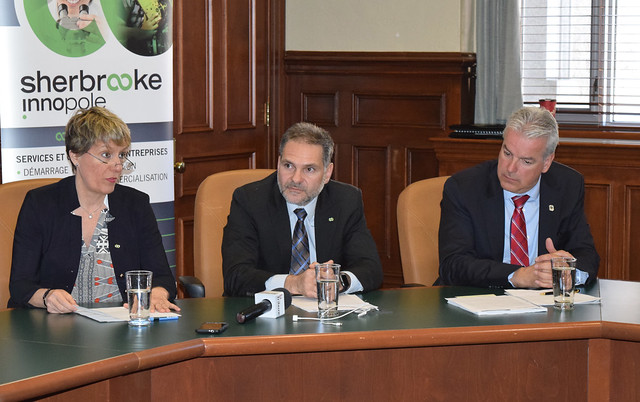 The economic development agency has submitted a revised annual activity report more in line with its three-pronged strategic plan – Facilitate, Assist, Communicate – and with the mandate given to it by the City of Sherbrooke in January 2016. This new presentation provides a more comprehensive picture of Sherbrooke Innopole’s activities and their concrete impact in a spirit of transparency and accountability.

Several growth-generating projects, spearheaded by Sherbrooke Innopole as part of the Facilitate component of its mandate, came to fruition in 2015, including: the launch of the incubator-accelerator Espace-inc, the launch of the Airpole Centre of Expertise in Airport Security, the creation of the new start-up and pre-marketing funds for innovative startup companies, the development of new industrial sites on Robert-Boyd Street, the extension of De Portland Boulevard, and the revision of the pricing policy for industrial sites.

“Optimum economic development requires a 360° perspective and simultaneous action on many fronts, for example by facilitating access to the implementation of tools, infrastructure, and favourable business conditions, or by providing insight to and assisting entrepreneurs with their projects and endeavours,” explained Pierre Tremblay. “In 2015, Sherbrooke Innopole’s team successfully accomplished this objective, in particular through its ever-expanding toolkit to help businesses grow and create wealth for our community.”

In terms of the Assist component, Sherbrooke Innopole’s professionals conducted 685 interventions with Sherbrooke companies to help them with their start-up, growth, and implementation projects. “Of these, 178 have been completed and generated investments of more than $35.5 million and the creation or consolidation of 919 jobs, without taking into account the increased productivity resulting from these projects,” noted Josée Fortin, Director General of Sherbrooke Innopole.

In terms of financing, 20 companies benefited from one or another of Sherbrooke Innopole’s funds, contributing to the creation of 127 jobs and the consolidation of another 157 jobs. Each dollar invested generated $16.63 in investment from the milieu, for a total of almost $16 million.

The availability of new industrial sites has also spurred start-up and relocation projects: 21 such projects were carried out with the support of Sherbrooke Innopole’s team, with overall investments of more than $33 million.

All companies from this sector fall within one of the five key sectors, with private and public research centres, specialized consulting services, and industrial distributors linked to the value chain to create comprehensive, dynamic ecosystems. In 2015, Sherbrooke’s five key sectors accounted for 16 678 jobs in 640 companies.

For Sherbrooke Mayor Bernard Sévigny, such a high level of investment confirms that basing the development strategy on key sectors has been successful, and that Sherbrooke’s industrial sector is strong and forward-looking. He emphasized the excellent outcomes and the work of Sherbrooke Innopole’s team, who “turned challenges into opportunities to think outside the box and move forward growth-generating projects for Sherbrooke.”

He also underlined the vitality of Sherbrooke’s business community: “This year has been booming with entrepreneurial endeavours, mainly thanks to the involvement of entrepreneurs in several initiatives, namely Entreprendre Sherbrooke. A strong entrepreneurial culture can only be developed if it is spearheaded by and for the entrepreneurs themselves.”

The mayor stressed how important it is that the City of Sherbrooke provide its economic development agency with the tools required to fulfill its mission. “In 2015, we were able to contribute to the launch of Espace-INC in the former police station and to propose solutions to several problems,” explained Bernard Sévigny. He gave as examples the development of new industrial sites, the revision of their land pricing policy, as well as the review of the procedures involved in issuing permits.

Furthermore, all parties agree that Sherbrooke is now better positioned than ever to optimize its economic and human potential in terms of knowledge and innovative entrepreneurship. “With the addition of Espace-INC and our new investment funds for the entrepreneurial ecosystem, we have implemented over the past year most of the missing parts for the continuum that aims to turn knowledge into collective wealth,” echoed Josée Fortin. “Although we still have work to do, the conditions for success are definitely in place.”

About Sherbrooke Innopole
Sherbrooke Innopole is the City of Sherbrooke’s economic development organization. Its mission is to ensure innovative, dynamic, and consistent economic growth by leveraging the start-up of companies that are the product of Sherbrooke research and ingenuity; by attracting new businesses; by supporting the expansion, innovation, and globalization efforts of existing manufacturers; by putting the multidisciplinary expertise of our team to good use; and by focusing on our five forward-looking key sectors: Life Sciences, Cleantech, Micro-Nanotechnologies, Information and Communication Technologies, and Advanced Manufacturing. www.sherbrooke-innopole.com

Back to the news
Read also