PRESS RELEASE – Today, the City of Sherbrooke and Sherbrooke Innopole announced several projects and commitments aimed at simplifying the lives of entrepreneurs and meeting the practical needs of young companies, as part of the Semaine Entreprendre Sherbrooke, Sherbrooke’s entrepreneurship week.

From the outset, Sherbrooke Mayor Bernard Sévigny has shown his satisfaction with the involvement of the business community in this process, which began last June, commending the many initiatives put forward while acknowledging the issues raised by entrepreneurs during the discussion tables. Mr. Sévigny announced the establishment of a working committee tasked with finding the concrete solutions, as quickly as possible, to mitigate the issues associated with some administrative hassles within municipal operations. Entrepreneurs will be represented on this committee, as will City of Sherbrooke’s land management department, Sherbrooke Innopole, Commerce Sherbrooke, and city hall.

“We have given entrepreneurs the opportunity to have their voices heard, with a strong will to listen to them and to take their observations into account. They have identified three major issues: Delays in the issuing of permits, being repeatedly directed towards various actors before knocking on the right door, and the coercive approach that seems to have resulted from a lack of clarity and information,” said the Mayor of Sherbrooke. “Each person’s contribution is essential to the creation of a dynamic and prosperous entrepreneurial community and municipal operations also has a role to play in breaking down barriers to entrepreneurship,” he added. 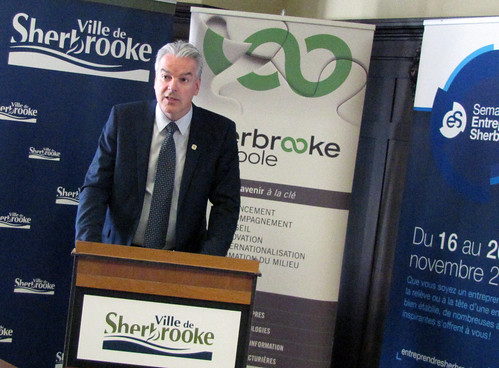 Sherbrooke Innopole then introduced new tools that it had developed to support the creation, growth, and continuity of Sherbrooke’s innovative start ups. The economic development agency’s Director General, Josée Fortin, revealed that a project for multi-tenant building dedicated to young life sciences businesses was presented to city council. Along with the launch of the incubator Espace-INC, this project was identified as vital infrastructure to respond to the needs of young entrepreneurs and was the subject of a commitment in Sherbrooke Innopole’s 2014-2018 strategic plan.

“We want our young businesses to be successful in their start ups and take flight, and they have significant needs in terms of support and guidance,” explained Josée Fortin. “Supporting and advising them is a key role of the directors of our key sectors, and this is at the heart of Espace-INC’s mission, which also makes workspaces available to them. However, life sciences businesses have specific needs in terms of the premises and equipment.”

The new infrastructure, a multi-tenant building erected in the science park, will offer affordable premises for these young businesses and will feature common laboratory-style spaces and equipment. Sherbrooke Innopole’s Director General noted that this will enable not only the continuity of numerous business projects that have sprung from the Université de Sherbrooke, but it will also increase how attractive Sherbrooke is to life sciences businesses and investors from elsewhere. The project will be reviewed by city council in the coming weeks.

Josée Fortin also revealed that two new investment funds for innovative startups with high potential were recently created by Sherbrooke Innopole to meet the specific needs of young businesses in the period leading up to the marketing phase; when there are often significant expenses and little revenue. “These investments will always be made in association with other partners and will be combined with close coaching for the businesses receiving financing,” said Josée Fortin. Four projects are currently being studied and we hope to have good news to share in 2016.”

The economic development agency also has good news concerning industrial land. “First, we are addressing the availability of land by opening Robert-Boyd Street and extending Portland Boulevard. These projects are key to developing our economy and they are already starting to bear fruit, with three plots of land already sold and eight projects under review,” said Josée Fortin.

Next, Sherbrooke Innopole tackled the issue of the cost and complexity of purchasing industrial land. A comparative study led by the organization revealed that the current pricing policy not only leads to significant delays for entrepreneurs, but the overall cost of land in Sherbrooke is higher than in other similar or neighbouring cities.

A new pricing policy for industrial land, which will set a fixed price including permanent infrastructure work, was developed in the past few months and was recently submitted to city council. “In tandem with the City of Sherbrooke’s Legal Affairs, Finance, and Urban Planning departments, Sherbrooke Innopole presented a new pricing policy that will simplify and accelerate the process of purchasing land, as well as making Sherbrooke much more competitive in comparison to other cities in terms of start up and relocation projects,” noted Bernard Sévigny.

Back to the news
Read also